Elaine Cheung moved to the San Francisco Bay Area from China more than 30 years ago. She found comfort in the city’s Chinatown, building a business and bonding with the community. Alan Trinidad reports on how Cheung navigated life in the United States.

In the backyard of her home in Millbrae, Calif., Elaine Cheung methodically waters each of her plants and picks off unwanted leaves. She has always had a love for taking care of plants and seeing them bloom.

Her plants aren’t the only thing she was able to grow in America.

Cheung migrated from Hong Kong to California in 1990. For 31 years, Cheung built and grew a skin care business in San Francisco’s Chinatown — the shop would eventually help her bring her father, mother and three siblings from Hong Kong to California in the late 1990s. Cheung’s efforts helped shape two generations of Chinese Americans in her family, including her two children.

“My biggest challenge I faced would be not being able to speak English and not knowing how to drive,” Cheung said.

Cheung moved to the U.S. because her then-husband’s family had settled in California. She admired the freedoms the United States advertised for its citizens. Despite the language barrier, she found a way to create a business and family in the community of Chinatown.

Cheung’s in-laws helped her settle in Chinatown where she ultimately studied skin care and eventually opened the Ocean Skin and Health Center — a practice that would continue for 30 years. Cheung eventually moved to Millbrae in 2003 to have more room for her growing family.

But Chinatown remained an integral part of her life.

“I was being stuck in the circle of Chinatown, but I am grateful that Chinatown allows me to speak my native tongue and has catered my business towards Asian population,” Cheung said.

San Francisco’s Chinatown is the largest and oldest in North America. During the mid-1800s, a wave of Chinese immigrants migrated to America after hearing rumors of scattered gold in the mountains of California. 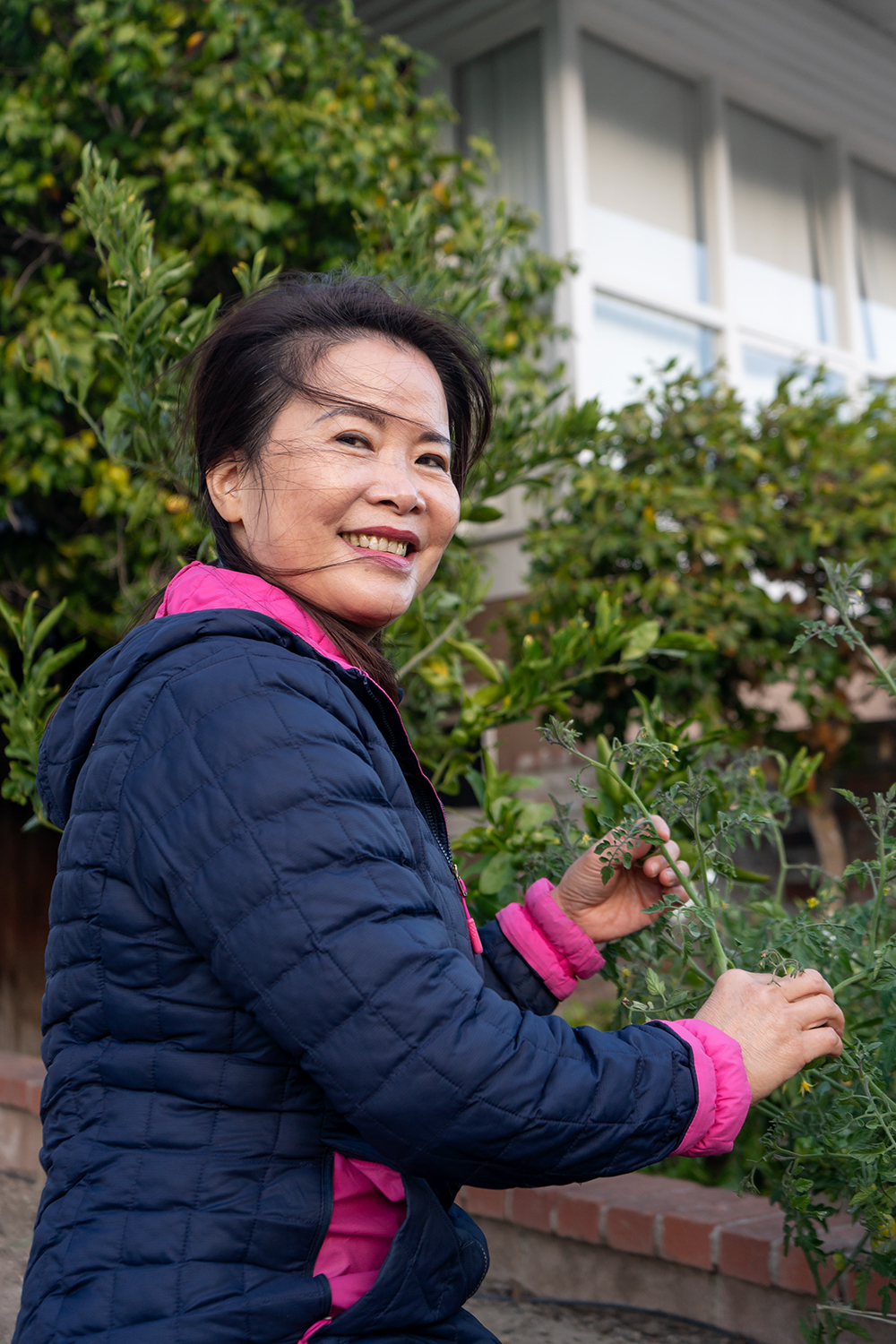 Elaine Cheung poses in front of her house in Millbrae, Calif., as she tends to her plants on Wednesday, Oct. 14, 2021. Cheung moved from Chinatown to Millbrae in 2003. (Photo by Alan Trinidad)
Chinese laborers faced racism, including laws that would force workers out of the gold mines and into a separated neighborhood in San Francisco. Chinatown was a safe haven for many immigrants seeking a life in the United States, including Cheung.

“I really like living in Chinatown and working in Chinatown because of the lifestyle and the type of food that they provide, [it] is very similar to the ones that I’ve had in China,” Cheung said. “I felt very comfortable staying in Chinatown.”

Tucked away between a Bank of America and local Chinese market, Cheung’s Ocean Skin Care and Health Center saw clients from all around the Bay Area. She performed cosmetic skin treatments and removed unwanted blemishes or marks.

After getting divorced in 2001, Cheung raised her two children on her own and said they were her biggest support system. Her relationship with them helped her better appreciate and value family, a mindset that she brought to her work. Cheung said she liked talking to her clients as if they were long-time friends or family members to make them feel more welcome. Her conversations usually consisted of food, family life and their children’s education.

“I like doing facials because during the process of facial treatments, I can chat with the customer and get closer with them, like treating them as family members,” she said. “And throughout the process, I have made lots of friends and close connections with a lot of people.” 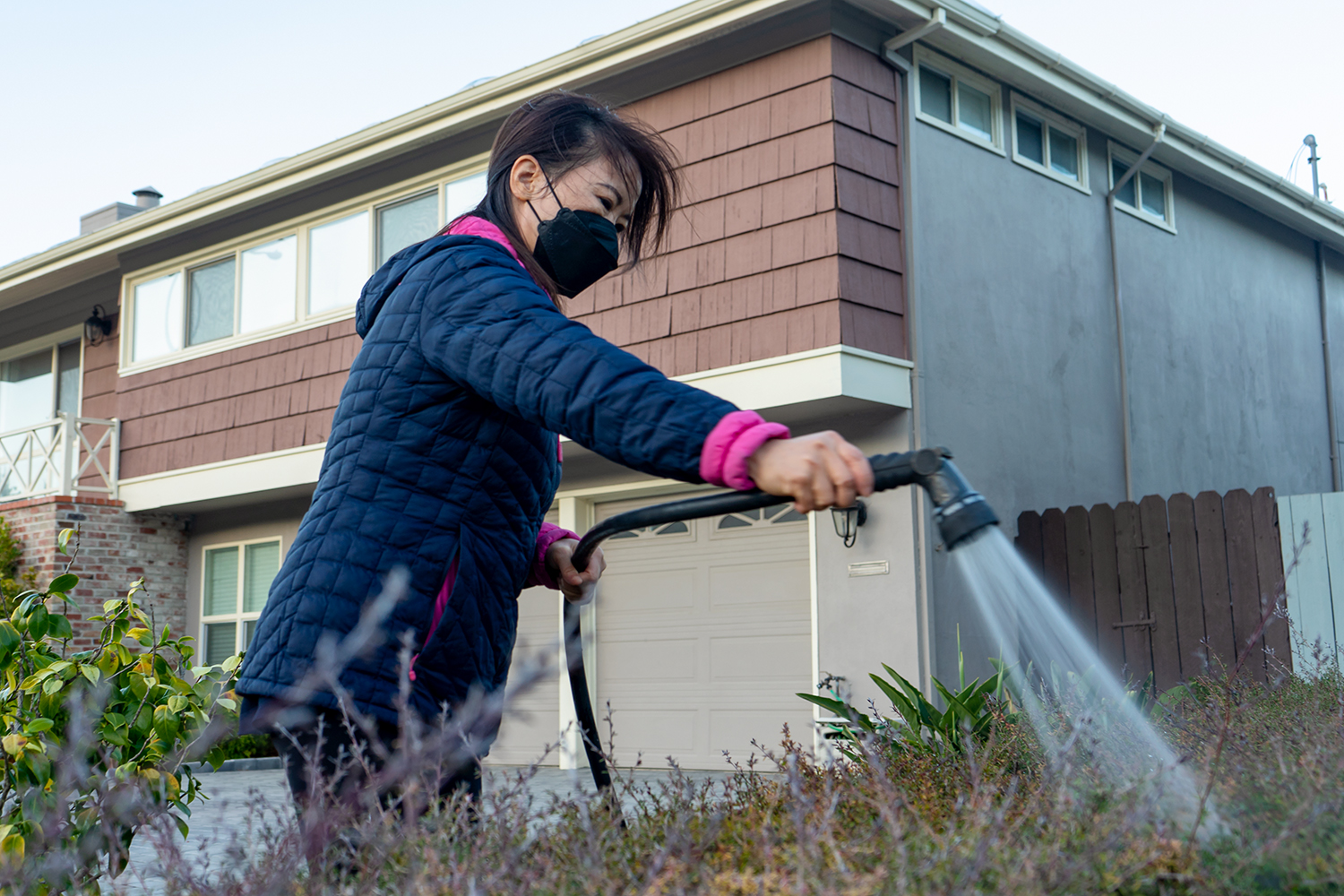 Elaine Cheung spends hours everyday watering and attending to the plants that surround her home in Millbrae, Calif., on Wednesday, Oct. 14, 2021. Cheung has always loved taking care of plants and seeing them bloom, according to her daughter. (Photo by Alan Trinidad) 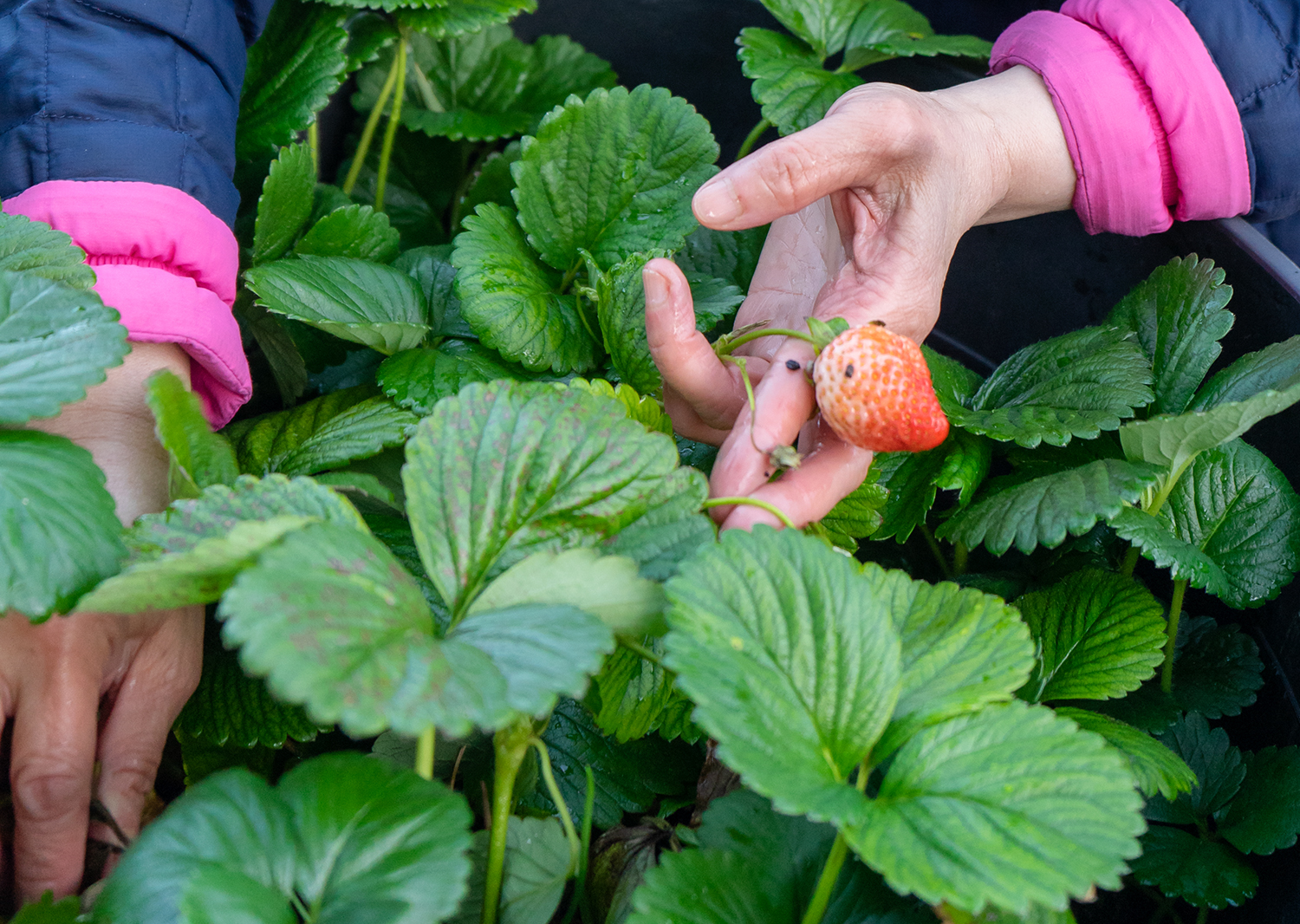 Elaine Cheung uses her hands to separate dead leaves and unwanted debris from her backyard garden in Millbrae, Calif., on Wednesday, Oct. 14, 2021. Elaine uses her hands when performing cosmetic skin treatments on clients. (Photo by Alan Trinidad)
Chinatown suffered a massive economic blow during the coronavirus pandemic. The San Francisco Chamber of Commerce reported that 75% of Chinatown storefronts became nonoperational during 2020. Due to loss of foot traffic, Cheung was forced to close her shop in 2020.

According to national report data from Stop AAPI Hate, there have been 9,081 reports of hate incidents involving Asian Americans from March 19, 2020 to June 30, 2021. Of those incidents, almost 14% were physical assaults, many involving elderly Asian Americans.

Note: Individuals who reported to Stop AAPI Hate could select multiple racial and ethnic categories. The numbers shown indicate the exact categories individuals used to self-identify. Some respondents selected the category “Asian” instead of selecting a specific Asian ethnicity. Some people chose the “Multiracial” category, while other selected two more categories to convey their multiracial heritage (e.g. “Chinese” and “White”). The presence of non-AAPI race/ethnicity is due to reports from multiracial AAPI persons as well as non-AAPI persons reporting on behalf of others or after witnessing an incident.

“I feel extremely sad that there are many Asian Americans are being targeted,” Cheung said. “Especially Chinese American. I feel scared to go out because of the recent attacks and feel like there is no protection towards Asian Americans in America.”

Cheung attended three rallies all around the Bay Area that support the protection of Asian American lives. Cheung said she felt it was important for more Chinese Americans to stand up and speak out against racial injustices.

“I believe that more Chinese Americans need to stand up and be united and participate in protest to let others know that we are not,” she said. “We are not easily defeated. And we need to fight against racism, through uniting together and not show weakness. And eventually that people’s stereotype against Chinese Americans will go away.” 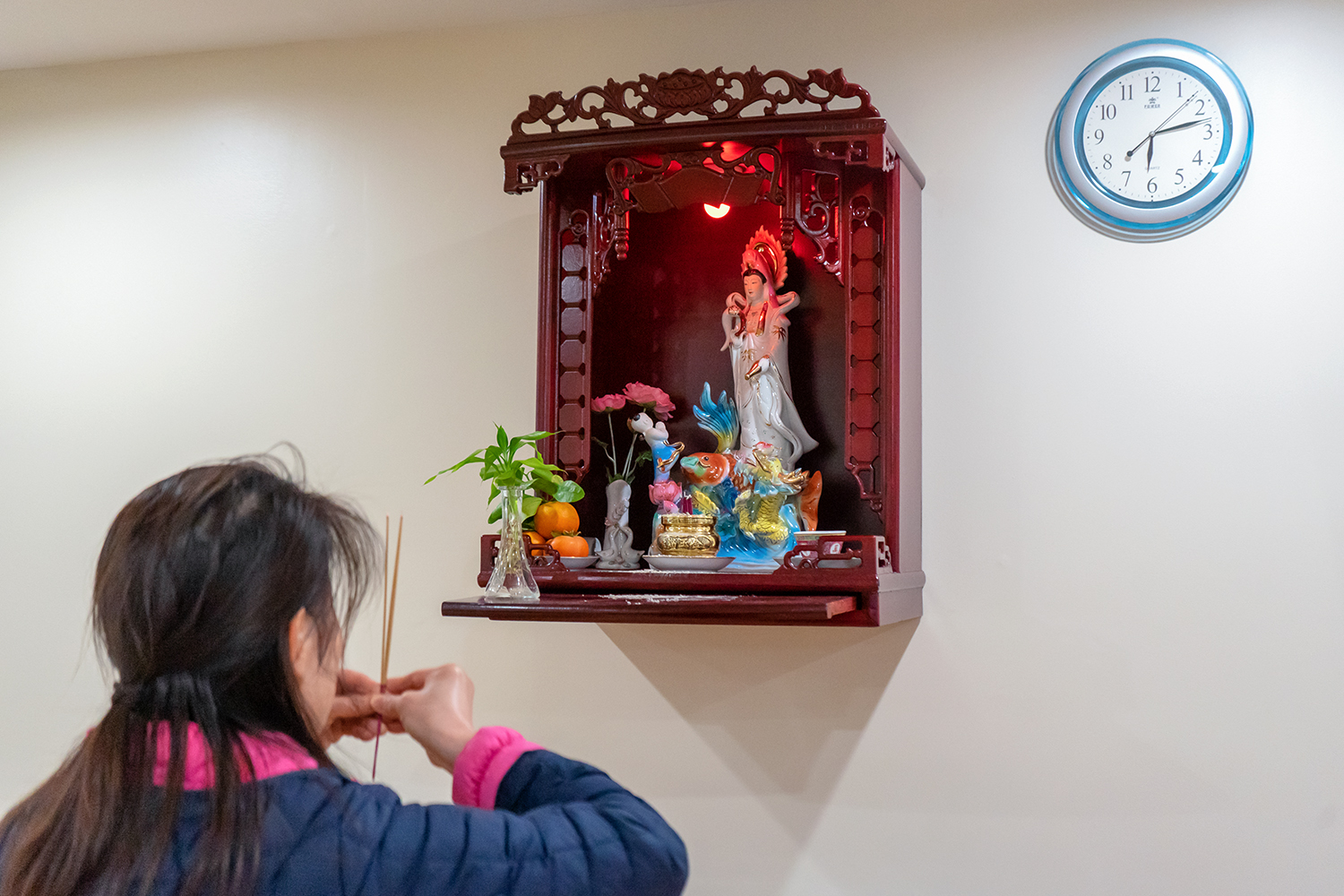 Elaine lights incense and prays to her religious altar in her living room in Millbrae, Calif., on Wednesday, Oct. 14, 2021. Elaine says she is grateful that Chinatown allowed her to speak in her native tongue of Cantonese and practice Chinese traditions. (Photo by Alan Trinidad)